A hearty welcome to Obama from Modi

As US president Obama steps into the Indian soil with his Air Force one, a fresh start in the bilateral relations between the two nations began to sprout. This is the second meeting between Modi and Obama and both were pleased to see each other. Modi emphasized on taking these relations to a whole new level. There were the series of contracts and promises made between these two great leaders who share their agenda and have a common understanding when it comes to their nation’s priority. 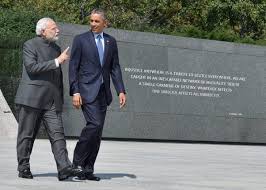 The biggest news, which came in was the announcement of the civil nuke deal between India and US. This has brought a breakthrough in India’s nuclear technology as it has been under the plan since past six years. Their agreement highlighted the administrative effort that would be completed as first priority. Modi added to his delight and said “The civil nuclear agreement was the centerpiece of our transformed relationship.” He further added that “I am pleased that six years after we signed our bilateral agreement, we are moving towards commercial cooperation, consistent with our law, our international legal obligations, and technical and commercial viability.”
Along with the nuke deal, there were many other important agreements made between the two nations. A hotline is proposed to be started between the US president Obama and Prime Minister Narendra Modi. Moreover, two more hotlines will be established between the NSA’s of two countries. Also with the renewal of the defence partnership for next ten years, no doubt Indian defence forces will be benefitted with this deal. It included the common research establishment to the study of the jet-engine technology and co-production of four “pathfinder projects”. Moreover, it emphasized on the joint military exercises between India and US. Obama referred to it as a step forward to DTTI, defence strategic framework. In addition to it, Obama agreed to negotiate, to offer funding for India’s vision to target 100 GW of solar energy.
Although it was a professional bilateral talks between Modi and Obama, but these leaders shared a very intense understanding and their thoughts and vision are common for the development. We hope that these agreements implement soon and US – India ties achieve a new milestone together – Chale Sath Sath for mutual benefit.

Next Story
Things to do in Andaman & Nicobar

OBAMA ALL SET TO VISIT INDIA THIS REPUBLIC DAY

US President Barak Obama will land in India for a three day visit which will last from January 25 to 27. His prestigious and highly secured...