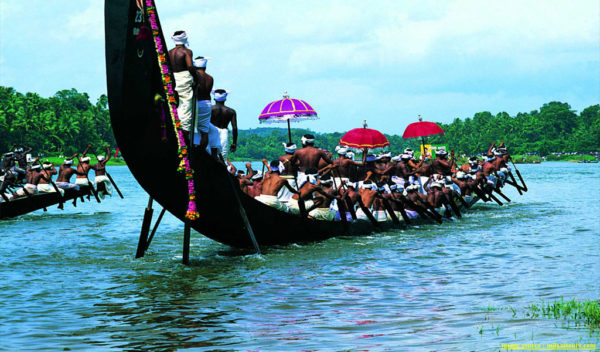 Besides a multitude of heavenly locations and scenic beauty, Kerala is well known for its temples and festivals. Almost every village in Kerala has a temple to appease the spiritual thirst of people, and most of these temples celebrate colorful festivals every year.

These temple festivals of Kerala are typically celebrated with a magnificent line up of caparisoned elephants, gigantic effigies of horse, bull or divine characters, enchanting percussion orchestra, traditional art forms and a spectacular display of fireworks. These festivals are known by different names such as Pooram, Vela, Bharani, Arattu, Utsavam, etc. Names and rituals may vary, but the festivity remains the same; fun is there in the air, on every face, and in every heart.

The Significance of Temple Festivals of Kerala

Information on Onam festival and other popular national festivals are readily available to the festival lovers. However, most tourists have no clear idea about the temple festivals of Kerala. These festivals are essentially regional celebrations dedicated to the local deity of a desam (region). The friendly competition of several small temples in the surrounding villages makes each festival a significant event year after year. Festivals like Vela and Pooram are celebrated elaborately in Palakkad and Thrissur districts.

These temple festivals of Kerala are usually held outside the main temple on a big ground or empty paddy fields after the harvest season, where a large number of bejeweled elephants line up amidst an ocean of people immersed in festive fervor. Among the countless number of temple festivals of Kerala in the list, we have selected 6 unique festivals that should not be missed while you are in Kerala between February to May.

The world-famous Thrissur Pooram, popularly known as “Pooram of all Poorams”, is one of the most spectacular temple festivals of Kerala. It is celebrated in the month of April / May at the premises of Vadakkunnathan Temple in Thrissur, dedicated to Lord Shiva.  This mega event is a friendly competition between two groups of Temples headed by Thiruvambadi Sri Krishna Temple and Paramekkavu Bhagavathy Temple.

Deities of the participating temples are brought to the Pooram ground in colorful processions. 15 or more bejeweled elephants on each group, magnificently decorated with golden head-dress and ornaments, lineup face to face in an enchanting atmosphere reverberating with the rhythmic percussion orchestra. More than 250 leading instrumentalists participate in each of the famous “Madathil Varavu” (Panchavadyam) and “Ilanjithara melam” (Pandimelam) orchestra, which are recognized as the major percussion ensembles of the Pooram festival.

The traditional Kudamattom ceremony, which involves changing of parasols of a plethora of design and color in short intervals by the people atop the elephants, is a wonderful sight to watch. The stunning display of fireworks will take the spectators to a mesmerizing world. The 36-hour festivities will bring in some delightful moments that cannot be ever forgotten in a lifetime. Millions of people from all over the country and also from abroad come to Thrissur to witness this spectacular visual feast on earth and make it one of the most colorful temple festivals of Kerala.

2.  Nemmara Vallangi Vela: Ever Seen such Unparalleled Fireworks and Festivities?

Nemmara Vallangi Vela is one of the biggest Temple festivals of Kerala that equals the famous Thrissur Pooram in its splendor. Nemmara and Vallangi, the two neighboring villages in Palakkad District, celebrate this annual festival with great competitive spirit.

The Vela is celebrated on the empty paddy fields after the paddy harvest is over. Flag hoisting is done 20 days before the Vela, which follows wonderful folk rituals like Karivela, Kummatti and Pandivela performed daily till the eve of the main Vela. On the final day, which usually falls on the first week of April, grand processions of caparisoned elephants of about 11 to 15 numbers from each group arrive at the premises of Nellikkulangara Bhagavathy Temple with the accompaniment of traditional percussion orchestra.

Huge arch-like structures, known as Aana Pandal, of amazing design and decoration, built by both the groups to accommodate the caparisoned elephants, are the major attractions of the festival. Standing face to face beneath these illuminated elephant pavilions, the two groups perform Panchavadyam, the traditional percussion orchestra, amidst the everlasting cheer of the enthusiastic crowd.  The best part of Nemmara Vallangi Vela is its fireworks, the magnificence of which is incomparable, and one can absolutely agree that it is the best fireworks display in the country.

3.  Arattupuzha Pooram: Conclave of Gods in the Lap of Nature

Arattupuzha Pooram celebrated in March / April is regarded as the oldest of all temple festivals of Kerala. It is held in the premises of the 3000-year old Arattupuzha Sree Sastha Temple in Thrissur district. Deities from 23 neighboring temples are brought here in a grand procession and worshipped with a belief that Gods and Goddesses visit Lord Ayyappa, the presiding deity of Sree Sastha Temple to pay obeisance.

The festivities of this seven-day festival reach their peak during the last two days. On the 6th day evening an exciting percussion orchestra, called Sasthavinte Melam, is performed in front of the caparisoned elephants. The flames of a number of luminously lit huge traditional lamps known as “Theevetti” offer a striking visual of the event. The ceremony continues till midnight and is followed by a stunning display of fireworks.

Devasangamam (the conclave of gods) is held on the 7th day early morning where 61 caparisoned elephants carrying deities of the temples of nearby villages line up on the vast area adjoining the temple, amidst traditional percussion orchestras like Panchavadyam, Pandimelam, and Pancharimelam. To conclude the festival, Araattu ceremony (ceremonial cleansing of idols in the river) is performed in the morning and the idols are taken back to the respective temples. This is the one of the Temple Festivals of Kerala which attracts devotees from far and wide.

Chettikulangara Bharani Temple festival of Kerala is celebrated in the Bharani Nakshatra of the Malayalam month Kumbha (February/March) at the Chettikulangara Devi Temple in Alappuzha district, is one of the most exciting main Temple festivals of Kerala. The remarkable events called Kettukazhcha and Kuthiyottam are the highlights of the festival. Kettukazhcha is a ritualistic offering by the devotees to their Goddess in the form of an amazing visual display of six huge temple cars called ‘Kuthiras’, five chariots known as ‘Therus’, and gigantic effigies of Bhima and Hanuman, which represent the architectural excellence of the people of the region.

Kuthiyottam is a ritual dance offered to the deity, practiced and performed by young boys below 14 years, which begins a week before the festival day. On Bharani day, the boys are taken in a procession to the temple, accompanied by caparisoned elephants, music, decorated umbrellas, and folk art forms.

Thousands of people from different parts of the country and abroad participate in this magnificent event and enjoy the blessings of Sree Chettikulangara Bhagavathy. Due to the spectacular visual display of the festival, it is under the consideration of UNESCO to be recognized with the status of Intangible Cultural Heritage.

Uthralikavu Pooram festival is celebrated at Sri Rudhiramahakalikavu Temple at Wadakkancherry in Thrissur district in the month of February / March. This Pooram is famous for its grand fireworks, Panchavadyam orchestra, and elephant parade, in addition to several cultural programs and folk art forms. Three desams (regions) surrounding the Kali Temple organize the festival in a competitive spirit to excel each other in every event. Festivities start with flag hoisting ceremony, seven days before the main Pooram and various folk art forms like Poothan, Thira, Kummatti, Kalakali, Nayadi, etc. are performed every day.

On the main Pooram day grand processions from the three desams, each having seven to eleven elephants decorated in the traditional festive style of Kerala, join together and line up at the main venue in front of the temple in a vibrating atmosphere reverberating with the beats of percussion orchestra. The Nadappura Panchavadyam is considered as one of the best Panchavadyam orchestras among all Temple festivals of Kerala.

The magnificence of the unique firework is the major attraction of the festival, which is a remarkable event to watch, especially due to the peculiar landscape of the area with several hills surrounding a low valley.

6.  Chinakkathoor Pooram: Brilliance of Colors and Beauty of Folk Arts

Major attractions of the festival include the procession of 18 kinds of huge stuffed models of horses, called ‘Kuthira’, and statues of 8 bulls, called ‘Kala’. Procession of 27 caparisoned elephants with the accompaniment of percussion orchestras like Panchavadyam and Pandimelam add much fervor to the festivities.

The festival continues till late at night and is concluded with fireworks. Thousands of people, irrespective of caste and religion, take part in the festival with full spirit and passion and enjoy some exciting moments of arts and culture that can be rarely experienced from any other occasion. This is one of the many temple festivals of Kerala which feasts the art lovers.

If you are eager to watch the temple festivals of Kerala, visit the cultural hotspots of Kerala in summer. The moment you become absorbed in the festivities, you will forget the heat of the blistering summer sun, because you have already become a part of a large crowd lost in the festive fervor, like a wave that has forgotten its identity in the huge ocean of ecstasy!

Next Story
Brij Region of India : The Land for the Sweet Tooth

One Reply to “6 Must-Visit Temple Festivals of Kerala: Cultural Icons of God’s Own Country”