6 Famous Temples of Kerala that will Conquer your Soul 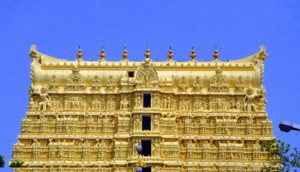 Besides the exhilarating scenic beauty and amazing tourist destinations, Kerala, God’s own country, is known for its spirituality and religious passion. Every breath is their religion and every city is a city of temples. There are a number of famous temples of Kerala, spread across all parts of the state, with their vibrant spiritual aura, magnificent sculpture, and amazing architectural style that mesmerize the pilgrims to visit here all year round.

The sacred temples dedicated to various gods and goddesses of Hindu mythology, quench the spiritual thirst of devotees and uphold the greatness of our rich culture and tradition. Colorful annual festival celebrations with the unique style of rituals featuring royal processions of bejeweled elephants, traditional “Chenda Melam” (percussion using Chenda), cultural programs, floats of gods and goddesses, and the amazing display of fireworks attract thousands of Indian and foreign tourists to these temples. Among hundreds of famous temples of Kerala, I am listing out the selected six that you should not miss.

1.  Sree Padmanabhaswamy Temple: The Richest Hindu Temple in the World

Sree Padmanabhaswamy Temple is located in Thiruvananthapuram, the capital city of Kerala. It is considered as one of the 108 sacred Vishnu temples in India and has its mentions in Skanda Purana and Padma Purana. It was King Marthanda Varma who renovated the temple and in 1750 he dedicated his entire kingdom to Lord Padmanabha.

The 18 feet long main deity of Lord Vishnu reclining on the holy serpent Anantha, was built with 12008 Salagramam stones brought from Nepal and covered with gold and precious stones. Name of the capital city ‘Thiruvananthapuram’ literally means ‘the land of Lord Anantha Padmanabha’.

The architecture is a blend of Kerala and Dravidian style with stone and bronze construction. The flag post of 80 feet height is covered with gold and copper sheets. The interiors of the temple are adorned with beautiful sculptures, paintings, and murals of Hindu deities.

Recently precious treasures of gold and diamonds worth billions of rupees have been discovered in the underground vaults of the temple making it one of the richest temples in the world. This temple of Kerala is considered as the riches owing to the abundant gold ornaments of the temple.

Guruvayur Sreekrishna temple, located in Guruvayur town in Thrissur district of Kerala, is one of the most visited Hindu temples of Kerala. Legend says that the temple was created by ‘Guru’ (Brihaspati); and ‘Vayu’, the wind God, by installing the idol collected from the submerged Dwaraka.

The main deity is Vishnu, worshipped in the form of little Krishna (Unnikrishna), in standing posture, with the four arms having the Panchajanya conch, Sudharshana chakra, a mace, and a lotus. It was the form of Vishnu revealed to Vasudeva and Devaki at the time of the birth of Krishna. Hence the temple is known as the ‘Dwaraka of the South’.

The temple has a gold plated flag post of 70 feet high; and a lamp pillar of 24 feet high, with thirteen circular receptacles. Puja routines as laid down by Adi Shankaracharya are followed. The temple is well known for its healing powers and people offer varieties of offerings to the Lord. Thulabharam is a popular offering where the devotees offer fruits, sugar, coconut, etc., equivalent to their weight. The diety of this temple is very attractive and attracts people from all over the world making this one of the most renowned temples of Kerala.

3.  Sabarimala Temple: Abode of the ‘Lord of Kaliyuga’

Sabarimala temple is a hill shrine located in the Western Ghats mountain range in the Pathanamthitta district of Kerala. Situated amidst 18 hills at an altitude of 1535 m above mean sea level, it is one of the few temples in the country that is open to people of all castes and religions. It is dedicated to Lord Ayyappa, known as the ‘Lord of Kaliyuga’, who is supposed to have meditated here after killing Mahishi, a powerful demoness.

In the main pilgrimage season, between mid-November to mid-January, millions of devotees visit this place every year, making it one of the most visited temples of Kerala.

There are some strict customs to be followed for the Sabarimala pilgrimage. The pilgrim should observe 41 days austerities. It begins with wearing a special garland made of rudraksha or Tulasi beads. He should wear a blue or black dress, bathe twice a day, take vegetarian food only, avoid hair-cut and shaving, refrain from drugs, and follow ‘brahmacharya’ strictly.

The bank of River Pamba is the halting point of vehicles and from there one has to climb the hills by foot to reach the temple which is about 5 km of trekking. Lord Ayyappa is a bramhachari (celibate) and hence women in the age group of 10 to 50 years are not allowed to enter the temple. The unique rituals observed here makes this one of the most famous temples of Kerala.

Chottanikkara Temple located in Ernakulam district is one of the famous temples of Kerala, where the Divine Mother Rajarajeswari (Adi Parasakthi) is worshipped in three different forms. The goddess is worshipped as Saraswathi in the morning; Lakshmi at noon; and Durga in the evening. The idol has four arms, holding a disc and a conch in the upper right and left arms; the lower right hand in a pose conferring boon, and the lower left hand in Abhaya (fearlessness) pause. The idol of Vishnu is also on the same pedestal and people chant “Amme Narayana”, praying the Goddess and Lord Vishnu at the same time. Other deities include Kizhukkavu Bhagavathy, Shiva, Shastha, Ganapathy, Nagas, and other Upadevas.

It is believed that the goddess will cure mental illness and any bad effects due to evil spirits. For this, the patient has to attend a “Guruthi Pooja”, a ritual performed every night to invoke the goddess. “Chottanikkara Makam Thozhal” (worship on the day of Makam star) is the most popular annual festival celebrated in the month of February/March. On this day thousands of devotees, especially women, do the ritual with a belief that they would get married soon. This is one of the unique temples of Kerala because of the unique rituals performed here.

The nearest railway station is Ernakulam Junction at 18 km and the nearest airport is Cochin International airport at 38 km.

Vadakkunnathan temple, also known as “Then Kailasam” (Kailasa of the South),  is located in the heart of Thrissur district of Kerala. It is one of the largest and oldest Shiva temples in the country. It is famous for its remarkable craftsmanship and Kerala style architecture on the Gopurams constructed on all four sides. Numerous mural paintings portray episodes of Mahabharata. The Koothambalam has very complicated carvings displaying a perfect example of craftsmanship on wood.  “Koothambalam” is a sacred temple theatre, usually a closed hall within the temple complex, where “Koothu’ an ancient art form of Kerala is performed.

Deities of the shrines are Lord Siva, Parvathy, Ganapathy, Sankaranarayana, Sri Rama, and Sri Krishna. A large white bull constructed on the veranda of Nalambalam is worshipped as Nandikeswara. The Siva Linga of this temple of Kerala is never visible because it is covered with a 16 feet high mount of ghee that has accumulated over years of Abhishekam. The ghee never melts or rots but has the miraculous power to cure diseases.

The spectacular and world-famous Thrissur Pooram festival is celebrated in the vast area around the temple. Vadakkunnathan does not take part in this festival or procession, but remains as a mere spectator, offering its premises to other temples to celebrate this great event. Sivaratri is the most important ceremony and there is no annual festival. This is one of the renowned temples of Kerala which should not be missed.

Here is one of the famous temples of Kerala, in the ‘Venice of the East’. Ambalappuzha Sree Krishna Temple, located in Alappuzha district in Kerala, is well known all over the country for its extremely delicious Prasadam known as Ambalappuzha Palpayasam, a sweet milk porridge made of rice, sugar, and milk. This daily offering has a unique taste due to the secret recipe and the specialty of the kitchen where it is made. In this temple, Sri Krishna is worshipped in the form of Parthasarathy, the role he has assumed in the Mahabharata war. The idol has a conch in the left hand and a whip in the right hand.

Similar to Guruvayur, here also the Lord is worshipped as child Krishna (Unnikrishnan).  It has a close connection with the Guruvayur temple. It is believed that the idol of Sri Krishna from Guruvayur was brought here to keep it safe when Tippu Sultan raided Guruvayur in 1789.

Thunjathu Ezhuthachan, the father of Malayalam language has created his famous work Adhyathma Ramayana in this temple.  The great Kerala artist Kunchan Nambiar started Ottan Thullal, a wonderful performing art form, in this temple. Ambalappuzha Arattu is the popular festival celebrated which lasts for ten days during March/April.

Do not forget the Dress Code

Most of the temples of Kerala insist a strict dress code to be followed while entering the temple. Men should wear mundu (dhoti), but should not wear shirts. Women can wear sari or half sari and blouse, long skirt and blouse, set dhoti and blouse, or other dresses as appropriate to their age.  Salwar Kameez or modern dresses are not allowed.

Famous temples of Kerala, India await you. They can hear the rhythm of your heartbeats; they can feel the sensation of your soul.  Be ready to surrender your heart; be ready to dedicate your soul.

Previous Story
My body, my baby, my choice – Informed birthing in India
→