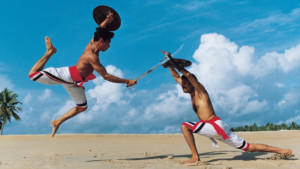 If you watch various traditional art forms of Kerala, you can realize the diverse nature of cultural echoes. You can comprehend the elegance of classical arts and the queerness of bizarre rituals. You can witness men transforming into deities and the deities dancing in front of their devotees. It is not fantasy; but reality. You can feel their flesh and blood. You can feel their breath and heartbeat. It is a world of Gods; a world of dancing deities! A world of colorful art forms of Kerala.

Art is an integral part of Kerala’s culture and is always attracted and appreciated by the audience. The art forms of Kerala were associated with temples and religious practices, and gradually became assimilated into the main cultural stream. With a rich cultural heritage, the wonderful traditional art forms of Kerala, will enlighten your soul and fill you with indefinable energy. Listed here are a few of these fascinating art forms.

Kathakali is one of the most popular performing art forms of Kerala, admired by the entire world for its distinctive class. The word Kathakali means ‘story play’. This 400-year old art form is a blend of music, literature, make-up, acting, and dance. Stories from Hindu mythologies are conveyed to the elegant audience through brilliant facial expressions, the classical language of hand gestures, and mesmerizing body movements.

Kathakali is usually performed in temples during festival seasons between October to March. It is performed in front of a huge oil lamp called ‘Nilavilakku’. It starts around 9 PM and continues till early morning. Chenda (drum), Mridangam and Ilathalam (cymbals) are the commonly used instruments. A Kathakali performer will have full control over his facial muscles by which he expresses all ‘navarasas’ (nine expressions) with amazing ease. With his fingers, he unfurls several mudras, the sign language of the story. He speaks through his body; not through words. Costumes are colorful and complex. It takes several hours to complete the face makeup, known as ‘Chutti’, and is one of the colorful art forms of Kerala which involves brisk movements.

Originated about 2000 years ago, Koodiyattam is considered as the oldest classical dance-drama of Kerala. In 2001, UNESCO recognized it as the ‘Masterpiece of the Oral and Intangible Heritage of Humanity’. Koodiyattam literally means ‘performing together’. It is performed by male and female (Chakiar and Nangiar) together and is accompanied by drummers, who use a special percussion instrument called Mizhavu. Koodiyattam is considered as a sacred offering to the deity and is performed in a temple theatre called Koothambalam, within the temple complex.

Themes are taken from Hindu epics and from the famous plays of eminent Sanskrit writers Harsha, Bhasa, and Kalidasa. Social issues relevant today are also introduced into the story to convey some clear message to the audience. The central character explains the Sanskrit story in Malayalam, with unusual acting skill and dramatic expressions that make the audience completely immersed in it. It may take several days to complete one story. Costumes and make-up are elaborate and have some influence of Kathakali.

3.  Mohiniyattam: The Graceful Dance of the Enchantress

Mohiniyattam is a unique classical dance and the most famous Art form of Kerala that exemplifies grace and passion. Mohiniyattam has its root in Hindu mythology. After churning Palazhy (the Milky Ocean), demons stole the elixir of immortality (nectar) from God’s. Lord Vishnu then took the form of Mohini (the enchantress) and performed the dance Mohiniyattam in front of the demons to steal the nectar back to Gods.

Originated in the 16th century, Mohiniyattam was popularized in 19th century by Swathi Thirunal Maharaja, the then King of Southern Kerala. Sringaram (amour) is the predominant mood in Mohiniyattam. Mohiniyattam is indebted to Kathakali for many of its mudras and eye movements. The graceful body movement, smooth footwork, subtle mudras of hands, delicate facial expressions, and the alluring movements of the eyes will enchant the mind and provide a sumptuous treat for eyes.

The dance follows strictly the scriptures of Natya Shastra and the music is Carnatic classical. The costumes including white saree with bright golden brocade at the edges are a simple and exclusive representation of the beauty of femininity. It is one of the most delightful art forms of Kerala

4.  Kalarippayattu: The Forerunner of all Martial Arts

Kalarippayattu is the unique martial art of Kerala and one of the oldest forms of martial training prevailing in the world. It is believed to be evolved as early as 11th century. ‘Kalari’ means the ‘venue of training’ and ‘Payattu’ refers to the ‘skill of fighting’. It is said that the secrets of this art form was handed down by Sage Parasurama and was taken to the Far East by the Buddhist Monk Bodhidharma. Earlier, each village in Kerala used to have its own Kalari where training is given to boys and girls to make them expert fighters. With continuous training over a period of time, the person will develop a perfect harmony of the body, mind, and soul.

The practice involves severe training with rigorous physical and mental exercises in the traditional Gurukula style. The training involves specific steps of foot and handwork, complete control over the body movement, and a perfect knowledge about striking the vital points (marma) of the opponent’s body. Weapons like the sword, shield,  sticks, spear, etc., are used. Kathakali, Theyyam and many other art forms of Kerala have drawn some useful training elements like body massage and physical exercises from Kalarippayattu.

5.  Theyyam: Watch the God Dancing in front of Devotees

Theyyam, also known as Theyyattam, is one of the most colorful and spectacular ritual art forms of Kerala, prominent in the northern districts of Kannur, Kazargode, and Kozhikode. The word ‘Theyyam’ means God, ‘Attam’ means dance; and the art form is ‘the dance of God’. Triumph of goddess over demons, spirit worship and hero worship are the important themes of Theyyams. There are more than 400 varieties of Theyyams, each having its own myth, costumes, songs, and dance, and is always performed by men of lower caste community. Wearing colorful costumes and exotic make-up, they go into trances and transform themselves into ancestor spirits and deities.

Theyyams are usually performed in front of the village or household shrines in open space and the villagers gather around. Huge head gears, facial make-up, costumes of red cloth and coconut leaves, and special effects are applied to give the superhuman appearance. Terrifying divine power manifests in the bodies of men and these powerful dancing deities console the devotees with blessings. Raktha Chamundi, Muchilottu Bhagavathy, Kathivanoor Veeran, Gulikan, etc., are some of the popular Theyyams. Chenda, cymbals, and kurumkuzhal (flute) are the instruments used. November to March is the peak season of Theyyams.

Mudiyettu is an age-old ritual dance-drama and the second Kerala art form, after Koodiyattam, being recognized by UNESCO. It is included in the list of ‘Intangible Cultural Heritage of Humanity’ in 2010. Originated in the 9th century AD, it is a sacred offering to Bhadra Kali (Goddess Durga), seeking her divine blessings.  Mudiyettu is performed in an open space adjacent to some Bhadra Kali temples in Ernakulam and Kottayam districts, between February and May. Lord Shiva, Narada, Darika, and Kali, along with few local characters like Koimpatta Nair and Kooli, appear in different scenes and the drama is concluded by the slaying of demon Darika by the Goddess Bhadra Kali.

The artists have to take strict ‘vrata’ (penance) and should renounce from worldly pleasures for several days before the performance. Mudiyettu is performed by the artists with heavy make-up, huge headgears, and gorgeous costumes in the background of ‘kalamezhuthu’ (tantric drawings of Goddess) on the floor. It is accompanied by songs and music of instruments like Chenda and cymbals. There are few performing troupes and four traditional families in Kerala who regularly perform this ritual art form.

You can enjoy this most unique Art forms of Kerala when you visit Ernakulam and Kottayam.

7.  Padayani: a Dance of the Warriors of Lord Siva

Padayani, a remnant of Dravidian forms of worship, is a traditional ritual art form and folk dance performed in Bhadra Kali temples in Pathanamthitta district of central Kerala from December to May. Padayani literally means ‘a row of warriors’.  As per myth, the anger of goddess Bhadra Kali was not extinguished after the slaying of Darika. So Lord Siva sent his bhoothagan (servants of the Lord) to the goddess, who danced in front of the goddess wearing masks and reduced her anger. Performers of Padayani wear masks made of the green lath of the areca tree, using natural colors of charcoal, turmeric, and sindhooram.

Padayani is a blend of music, dance, acting, and satire which is one of the most amazing art forms of Kerala. Songs in Malayalam are sung accompanied by a single instrument called Thappu. In the beginning, the Thappu is tuned by facing it towards the fire and heating it. The different varieties of dances, known as Kolam, are performed by men and children. Kalan Kolam and Bharavi Kolam are some of the popular Kolams. Padayani at Kadammanitta temple is very famous.

Garudan Thookkam, literally meaning ‘Eagle Hanging’ is one of the bizarre ritual art forms of Kerala performed in the Kali temples of the southern districts as an offering to the Goddess Bhadra Kali. Performers of this ritual will be dressed like Garuda, the vehicle of the Hindu God Vishnu, and dance to the tune of the instruments like chenda, cymbals, maddhalam and horns. After the dance performance, they are pierced at their back skin with hooks and hung from a shaft. These hanging Garudas are taken in a procession on bullock carts, chariot-like structures or open vehicles.

As per legend, goddess Kali remained thirsty after slaying demon Darika, and Lord Vishnu sent Garuda to quench her thirst. Kali’s thirst was appeased only after she got blood from the dancing and bleeding Garuda.  Devotees from different parts of the state perform Garudan thookkam to express their gratitude towards the blessings of Goddess Kali. This ritual is performed in Ernakulam, Kottayam and Alappuzha districts during February – March.

Life is a colorful drama, full of mysteries and miracles. We are the actors and we are the audience. Gods and demons reincarnate in our dexterous acting. Enjoy the endless episodes; enjoy the enthralling beauty!

Next Story
The Khasi Tribe-Where Women are the Rulers…

India is a land of diverse cultures. Despite the differences, a unique harmony co-exists with its cultural diversity, which has attracted...