Ragging in india:How many more lives before it stops? 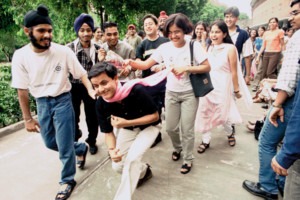 Joining a college is filled with both excitement and tension. The change of environment, the tension choosing the subjects, pressure to achieve things all induce tension on the students. Along with this the tension of ragging is also added.

Ragging in India and its history

Ragging is the act teasing of the newcomers by the seniors of the college. Ragging is also called hazing in some countries, is most prevalent in Colleges. Initially ragging in India s

tarted as some fun activity to welcome the new students and to get to know each other. It progressively took violent methods with ragging, to the extent of disturbing the confidence of the new students. Physical torture and psychological tortures were also induced in the name of fun. The newcomers were also robbed of their money and possessions sometimes.

With many ragging cases ending up in suicide, the authorities took cognizance of the offense and started imposing ban on ragging in India. Despite the legal ban, ragging still keeps happening, but the intensity has come down of late. The ragging spread like an infection and girls ragging their juniors also cropped up. This culture spread to hostels also and girls hostel ragging cases were also reported

Considering the many events of suicide and death by brilliant students across the country, the authorities proceeded to enforce ban on ragging.

1)    Tamil Nadu was the first state to pass a law about ragging.

2)    Subsequently the Supreme Court of India, in 2001 made anti-ragging laws.

3)    In 2007 the Supreme Court passed an Interim Order making it mandatory for the educational Institutions to file FIR about any instances of ragging.

Owing to all these, ragging has come to control, though not completely out of picture. Despite the fact that many of their fellow students died due to ragging, students still continue to rag, which is a shame on the part of students.  Even prestigious institutions were involved in ragging incidents.

The Ill effects of ragging

1)    The students looses confidence in his fellow students, especially seniors

2)    The mental health of the student gets disturbed

3)    The ragging events may progress into revenge taking incidents

Student life is the time to acquire knowledge, earn friends and learn the art of living happily. This precious time being used for such irresponsible activities is a sad part.

The students who are the future of any country should have self discipline. The law cannot teach anyone to have a human heart towards fellow beings. It should come naturally.

Students, act responsibly, have a heart for youngsters, end this nonsense of ragging, welcome the new batch to college with a smile, lend a helping hand, make college life enjoyable.

Previous Story
We are Responsible for the River pollution, stop it!
→