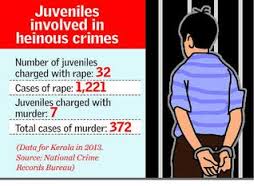 The incidences of juvenile crime are increasing at alarming speed. This calls for review and reconstruction of the Juvenile justice act. There is huge demand by the people, especially those who are victims that punishment should be decided based on crime and not on age. The process of amending the act has been set to motion in an attempt to control juvenile crime.

Amendment to Juvenile Justice (Care and Protection of Children) Bill 2014 has been given the nod by the Union Cabinet. The new amendment will look to handle crimes committed by juveniles, which are children aged 16-18, in a better way. The Union Cabinet has come to this decision in the wake of the increase in crimes committed by this age group, some of which include heinous crimes like murder and rape. 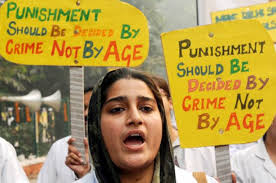 The new bill will replace the Juvenile Justice Act, 2000. With many social activists expressing their concern over this proposed change and saying that it is vital to protect the rights of youngsters in that age, the government has assured them that they will look for striking the right balance between condemning the accused and protection of their rights.

The bill states that crimes committed by juveniles will be categorized as those committed as a child or as an adult by the Juvenile Justice Board. Since the board will have psychologists and social experts, the categorization will be fair and efficient, while protecting the rights of the juveniles in making the decision. The nature of the trial held after this will depend on the verdict of the Board. The government clearly stated that they are making this change in order to deter the heinous crimes committed by juveniles, and trying to guide them to the right path. Former juveniles themselves agree that the help the Juvenile Justice Act, 2000 gave them changed their life, and that the government should look for guiding them to the right path rather than condemning them to prison.

The Bill will now be presented to the Parliament in the next session for debate and discussion on its approval.

Next Story
Mt. Kailash, Mansarovar Lake : The Beauty of Tranquility