Mystical Oracles of Kerala and their Strange Rituals.. 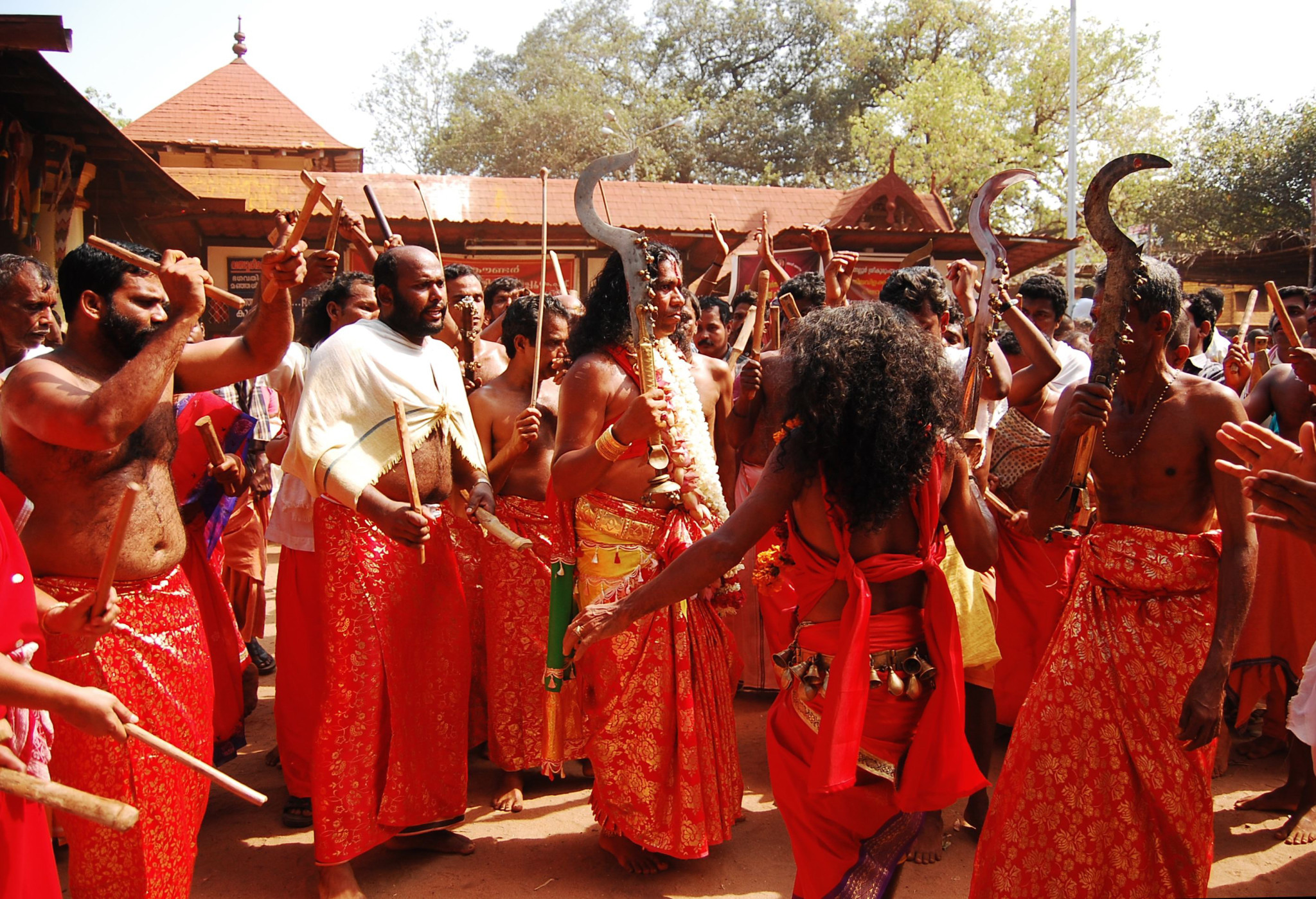 Have you ever seen thousands of god-fearing devotees wearing red costumes, making a mad rush around the temple, waving their sabers in the air and abusing the deity with obscene songs? Come to Kerala and visit the Kodungallur Bhagavathy temple during the annual Bharani festival and witness the strange rituals and the celebration of the mystical oracles of Kerala.

Oracles of Kerala – This is the Hour of Liberation

They come like the violent outburst of a tempest. Wearing bright red clothes wrapped around their bodies and heavy waist belt decorated with tiny metallic bells, they perform frenzied dances with divine ecstasy. Their heavy anklets around the legs produce vehement vibrations in tune with their vigorous steps. With the curved blades of their sacred sabers, they repeatedly smite their forehead, making a sacrificial offering of their own blood to the deity, declaring the communion with the mother goddess.

With their long untied hair flying around their heads and faces covered with a mixture of blood, turmeric, and vermilion, these ‘followers of the goddess’ enjoy the celebration of liberation. In the background, throngs of devotees with rhythmical clacking sticks dance around them singing obscene songs abusing the deity…….. You are within the temple grounds of the famous Kodungallur Bhagavathy temple and this is the hour of the mystical oracles of Kerala.

Oracles, known as ‘Velichappadu’ or ‘komaram’, are the mediators between God and its devotees. They are the followers of goddess Bhadrakali and are considered as the prophets of the common man. It was a unique practice to instate oracles at Bhagavathy temples of villages in the northern districts of Kerala, especially Palakkad district. At the temple where he is instated, the oracle appears before the devotees in his traditional habiliments. He serves the devotees and predicts solutions to their issues.

In the event of divine revelation, he goes into trances and after being possessed by the goddess his body starts trembling slightly. Wielding his heavy sacred sword with one hand and flipping the shoulder-length hair with the other hand he walks to and fro with vigorous steps. With incomprehensible words, he communicates with the goddess and conveys the revelations to the devotees. He blesses them by gently touching their head with the tip of his sword.

There were several ancestral homes, the families of oracles, where the oracle cult was continued from generation to generation. When instated as an oracle in a temple, he has to lead a simple life and has to depend on the offerings and donations of his devotees. Nowadays, instead of such practice, the Kerala Devaswam Board pays salary to the oracles. There was a time when the oracles of Kerala enjoy a lot of importance and great respect in the society and their advice was treated as word of God. But now, few people are interested in this profession and youngsters shy away from becoming oracles thus making it a vanishing culture.

Kodungallur Bhagavathy Temple – the Arena of Self Sacrifice

The legendary Bharani festival is celebrated in the Kodungallur Bhagavathy temple in the Malayalam month of Meenam (March/April) every year. Kodungallur temple, located in Thrissur district, is one of the first few temples in Kerala which has no restrictions of caste and religion. The oracles and the pilgrims who celebrate the festival are mostly agricultural workers belonging to Thrissur and the northern districts of Kerala, including Palakkad, Kannur, and Wayanad. They arrive at the temple after the harvest season to celebrate the festival of liberation which is one among the mystical oracles of Kerala.

Kodungallur Bhagavathy temple was supposed to be built during the reign of Chera Kings. Deity of the temple is Goddess Bhadrakali, popularly known as “Kodungallur Amma” as well as “Kurumba Bhagavathy”. The idol is six feet high, carved from a jackfruit tree, and has eight hands holding various weapons and attributes. There is a Shiva shrine in the temple and the practice is to offer puja first to Shiva and then to the Goddess.

Kodungallur Bharani festival is celebrated in honor of the victory of Goddess Bhadrakali over demon Daarika. The festival begins with a ritual called ‘Kozhikkallu moodal’, literally meaning ‘covering the cock-stone’. It is a ceremony that symbolizes the beginning of the fight between the goddess and the demon. The ritual involves shedding of blood by sacrificing cocks on a red cloth placed near two round stones that remain covered with sand. Members of the Kodungallur Bhagavathy temple have the rights to perform this ritual.

‘Kavu Theendal’ (polluting the temple) is the most important event of the mystical oracles of Kerala, which is overseen by the King of Kodungallur. The ritual begins by unfolding a red ceremonial umbrella over the King’s head. The next moment, throngs of oracles assembled at different spots of the temple compound make a mad rush around the temple in their red costume, waving their sacred swords in the air while other members of their team strike the temple rafters with sticks and throw cocks and other objects over the roof to the inner quadrangle.

They sing songs in obscene language abusing the goddess. It is believed that the abuse of the devotees is acceptable to the goddess. With their frenzied dances, the oracles and their team circumambulate the temple three times and in the end, they fall before the king for his blessings. After the blessings of the King, the temple is closed to the public for one week for purification rituals. With their souls redeemed of sins and hearts filled with contentment, the oracles of Kerala return home for a comeback in next year.

The Glory of Faith

Thousands of pilgrims, who have firm belief in the mother goddess, come to the temple every year seeking her blessings. Pilgrims bring with them offerings of a large number of cocks, rice, betel leaves, nuts, pepper, turmeric, salt and chilly. It is believed that the goddess would protect them from diseases like chicken pox and cholera.

The sexually explicit songs abusing the deity are meant for appeasing the goddess who could not control her anger after killing the demon Daarika. Acceptance of the abuses from the devotees signifies divine love and patience of the mother goddess. The songs filled with unrestrained expression of sexuality ridicule the sexual hypocrisy of the community.

How to Reach there

Kodungallur is well connected by buses to Thrissur (38 km), Ernakulam (30 km) and Guruvayur (50 km). The nearest railway station is Irinjalakkuda at 22 km away. Cochin international airport is at a distance of 35 km.

For the poor devotees and the mystical oracles of Kerala, the Kodungallur Bharani festival is not just a celebration for singing obscene songs and performing bizarre rituals. It is a sacred mission in the abode of the mother goddess who sanctifies them with some blissful moments that relieve them from the burdens of life and fill their heart with the ecstasy of liberation and divine consolation.

Next Story
Chanakya : Life and Mission of a Distinguished Diplomat

One Reply to “Mystical Oracles of Kerala and their Strange Rituals..”