Elephanta Island : Travel Back in Time to the Ancient Cave City of Shiva Cult 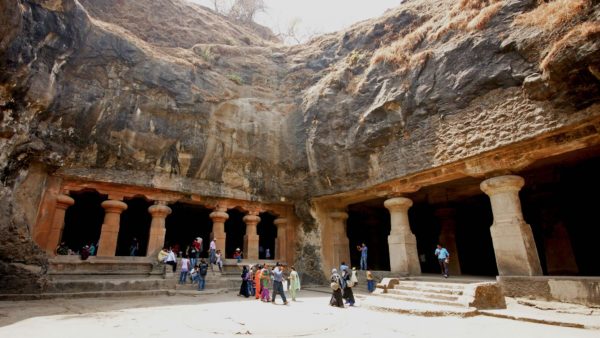 A 50-minute boat ride from the Gateway of India will take you to 1500 years back in history. You will reach a different world, free from concrete jungles and corporate pretense. It is Elephanta Island, the abode of ancient cave temples of Shiva cult. This small island, which features two hillocks separated by a narrow ravine, appears like a massive turtle popped up from the depth of the ocean. Here you can witness the aesthetic beauty of the ancient Indian rock-cut architecture and cave culture. Every lifelike sculpture of the caves silently speaks the stories of Lord Shiva. The walls of the caves reverberate with the prayers of Lord Shiva and the vibrant bodies of deities seem to be swaying to the rhythmic tune of divine chants. A must visit tourist destination in Mumbai, it serves as a great spot to escape from the hustle and bustle of the hectic city life.

History of the Mysterious Island

Since no inscriptions are available on the Elephanta Island, the periods of creation of these caves remain quite vague. Local people believe that the caves were built by Pandavas of Mahabharata. As per archaeological specialists the island was believed to be occupied from as early as 2nd century BC and the rock-cut caves were constructed during 5th century to 8th century AD. Originally a Hindu place of worship, known as Gharapuri, the island was ruled by different dynasties including the Konkan Mauryas, Badami Chalukyas, Rastrakutas, Kalyani Chalukyas, Deogiri Yadavas, etc., until the Portuguese rule, which began in 1534. Portuguese renamed the island as Elephanta after seeing a colossal rock-cut elephant sculpture near the entrance. They failed in their attempt to take the massive elephant statue to their homeland and now it can be seen at the Jijamata Udyan in Mumbai. When the island was possessed by the Portuguese, it put an end to the existing religious worship of the main cave except for the annual Maha Shivaratri festival, which is survived to this day. The Portuguese rule damaged and destroyed the priceless sculptures of the Elephanta Island. They converted the island into a watch tower and installed two huge cannons at the top of the hill. The Portuguese soldiers used the sculptures of Hindu deities as targets for shooting practice and damaged most of them. They destroyed the inscription related to the construction of the caves leading the historians into blind speculations. Portuguese left the island in 1661 when Charles II of England married the daughter of King John IV of Portugal. The island then became under the possession of British Empire as part of dowry!

Elephanta Island is located in the Arabian Sea at about 10 km to the east of Mumbai coast. Once you reached Mumbai, you have to head for Gateway of India from where you can catch a ferry that will take less than one hour to reach the island. Gateway of India is just 10-minute taxi ride from Chhatrapati Shivaji Terminus (CST) railway station and about 23 km from Chhatrapati Shivaji International airport. 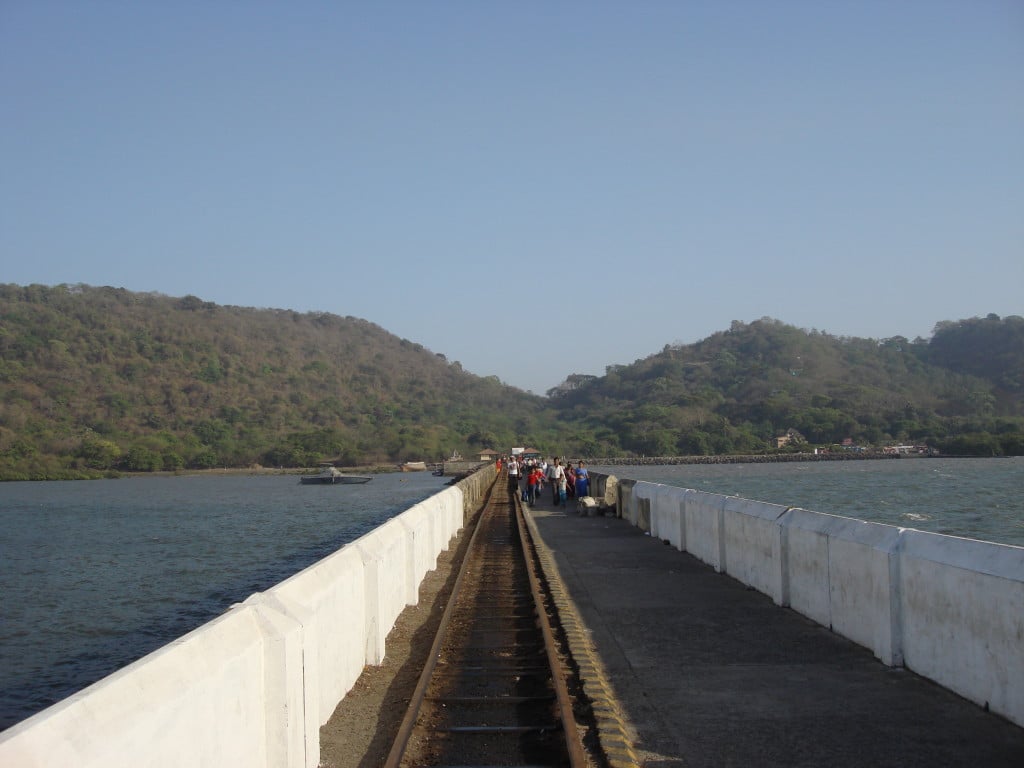 Hills of Elephanta and the route from jetty to island

In every half an hour a boat leaves for Elephanta Island. From the jetty of the island, the cave temple is at a kilometer distance. You can travel by a small toy train from the Jetty to the base of the hill or you can walk along the pier to reach the entrance of the Gharapuri village. After paying the village entry fee at the security you need to trek 120 steps to reach the plateau where the caves are located. On the way there are hawkers selling souvenirs, artifacts, paintings and jewelry; and also stalls with snacks and drinks. Don’t keep your snacks and valuables outside; there are naughty monkeys looking for a chance to grab them when you become careless. At the end of the path is the ticket counter for the caves and a restaurant operated by Maharashtra Tourism Development Corporation. You are now ready to step into the courtyard of the main cave.

There are two groups of caves in the island, which are carved from solid basalt rock. One can find some resemblance to the rock architecture of the famous Ellora and Ajanta caves, which are about 300 km away from this site. Though these caves were painted originally, time has erased them and now only traces exist. The larger group of caves on the western hill has five caves which are renowned for magnificent Hindu sculptures.  The second group on the Eastern hill contains two caves with Buddhist monuments. 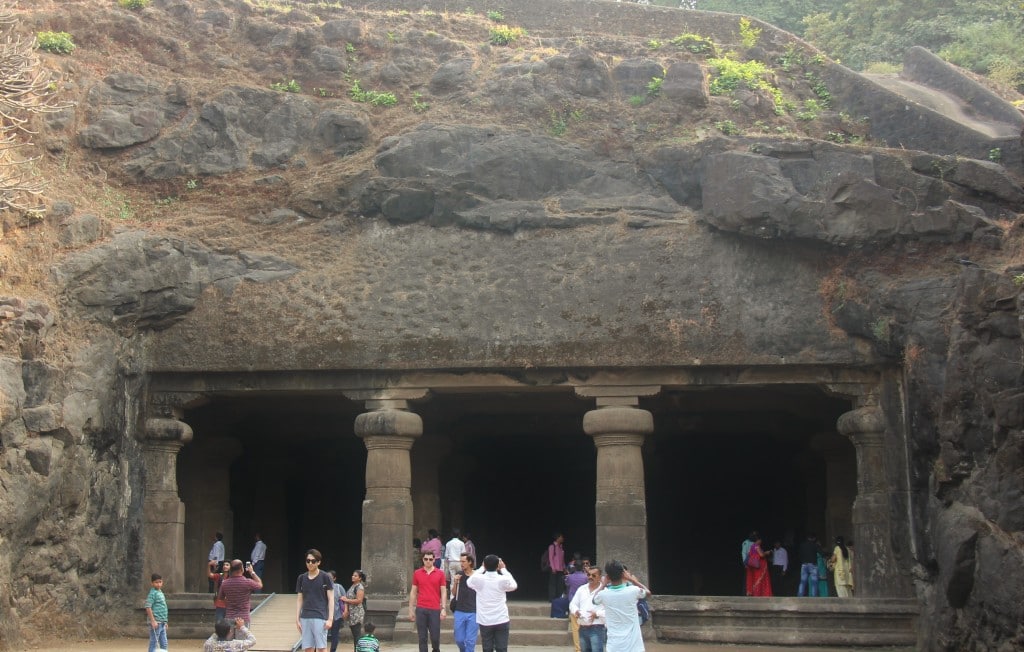 Cave 1, also known as the Great Cave or Shiva Cave is the main attraction of the island. It is a large rock-cut temple complex with an area of 60000 square feet and measures 128 feet from the front entrance to the back. The entire complex is created by a ‘superhuman process’ of rock removal and appears to be a massive sculpture with chambers and corridors for walking.

Main Hall of the Great Cave

You can enter the cave through the main northern entrance to a massive hall supported by large pillars, six in each row, which divide the hall into smaller chambers. The roof of the hall has beams, which are supported by large stone columns crowned with capitals. The northern entrance has a steep flight of steps and two large panels of Lord Shiva in the forms of Yogishwara (The Lord of Yoga) and  Nataraja (the Cosmic Dancer). 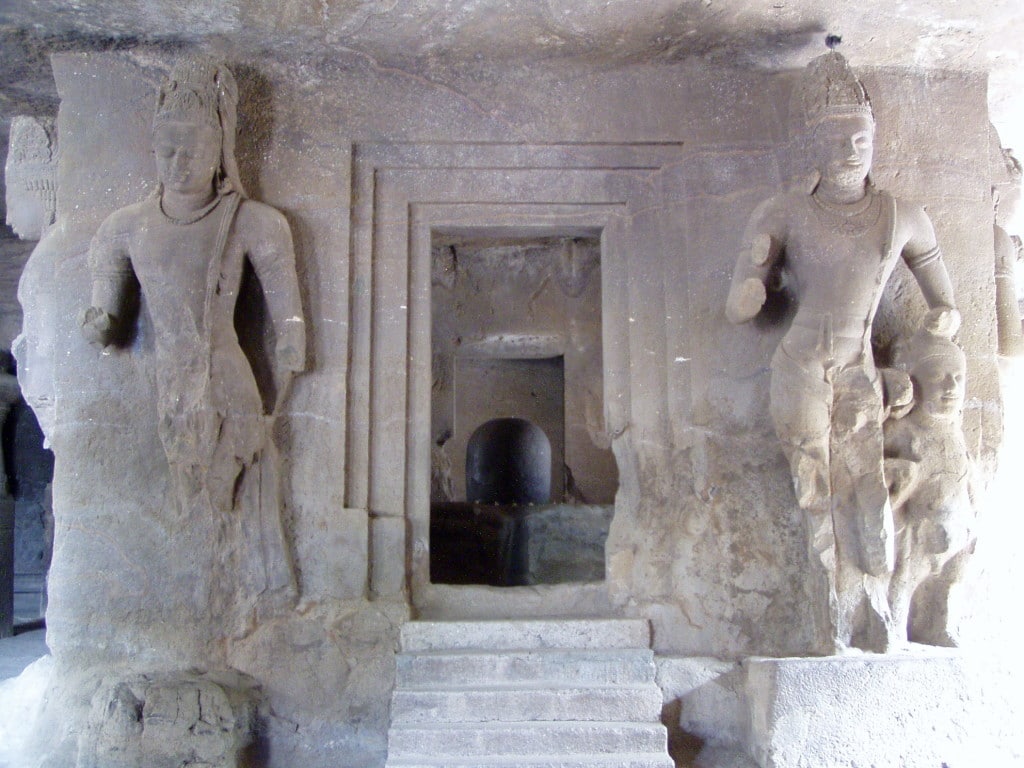 Inside the cave has a central Shiva shrine which has four doors flanked by large images of two dwarapalas (gate keepers) in front of each door. A Shivalinga is set on a raised platform at 6 feet height above the floor. 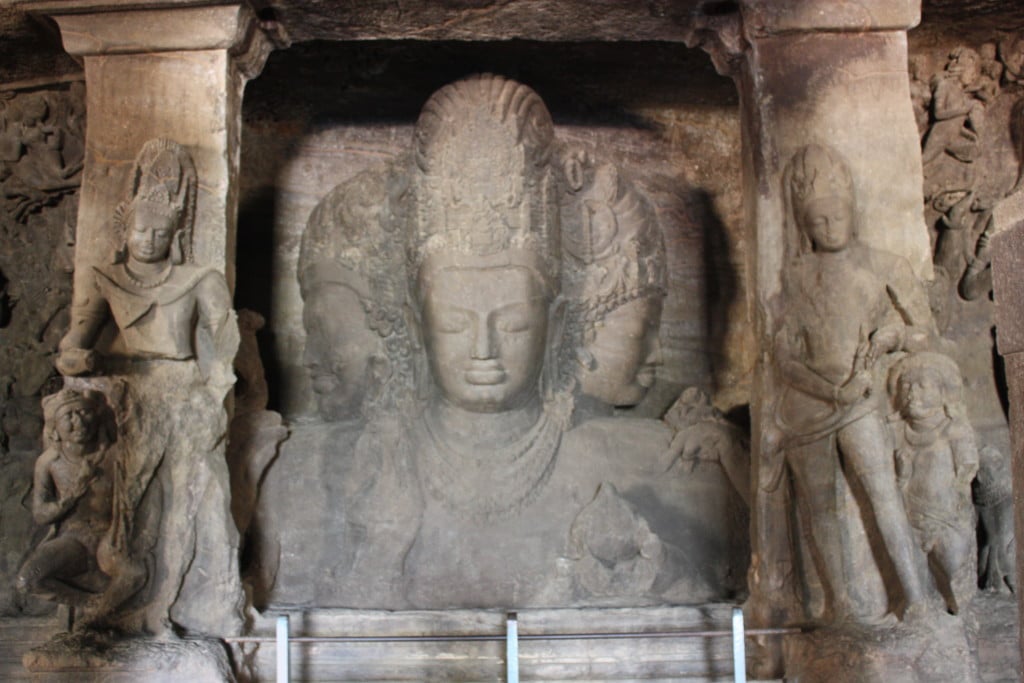 There are magnificent carvings of Shiva in each wall of the cave, with more than 5 meters height and in different forms. The southern wall has the most imposing masterpiece of 20 feet tall Trimurti (three-headed) sculpture of Lord Shiva, representing the three essential functions of creation, protection and destruction. The right face represents creator or Vamadeva, the central face is the preserver or Tatpurusha and the left face represents the terrifying destroyer or Aghora. 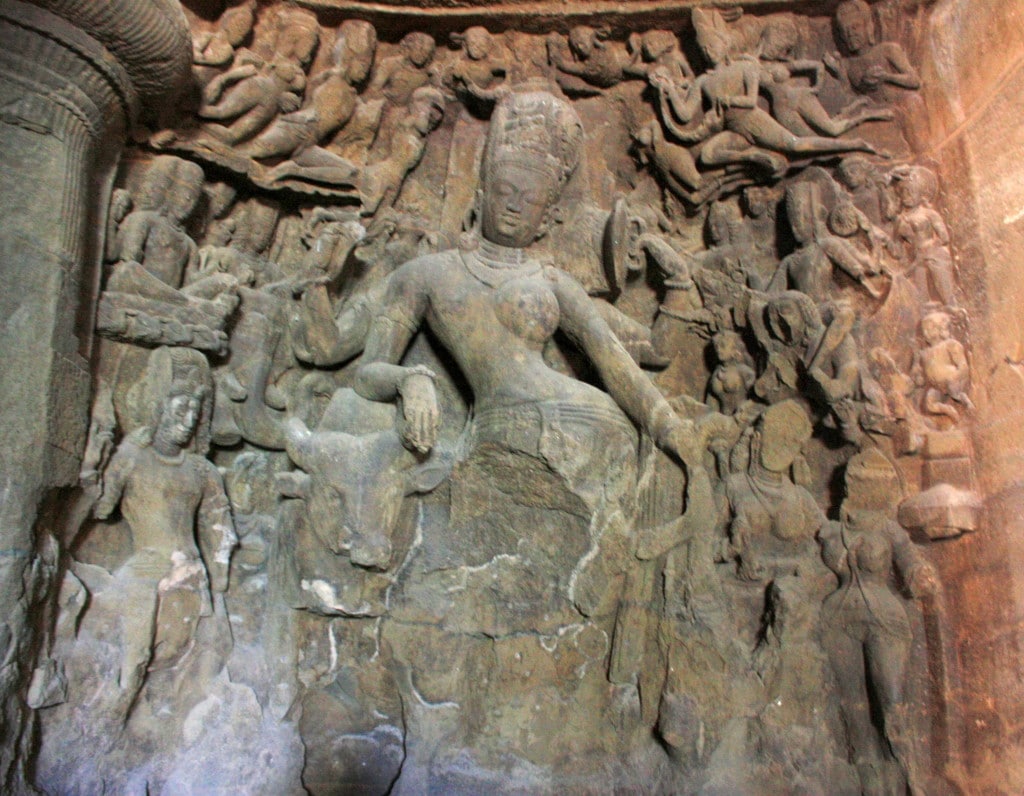 Other famous sculptures include Ardhanariswara (half man and half woman), Ravana shaking the Mount Kailash (similar to that in Ellora caves), Shiva-Parvati on Mount Kailash, Kalyanasundaramurthi (Shiva’s marriage to Parvati), Andhakasuramardana (slaying of demon Andhaka), Gangadhara (River Ganges descending from Shiva’s matted locks), and so on. The artistic excellence of this rock architecture is the epitome of ancient Indian art and culture and a testimony to the hard work of our ancestors.

The other four caves in the Western hill are smaller in size and in a state of unfinished condition. Cave 3 is the second largest cave, which has an impressive facade with a row of large capital pillars and richly carved doorways. The eastern hill, known as Stupa hill, has a brick stupa on its top and two Buddhist caves, one of which is incomplete. They need more excavation and are preserved as protected areas with no access to visitors. Before leaving the island you can make a small climb to the top of Cannon Hill, where the two Portuguese cannons are placed in strategic locations. In the base of the cannon, you can find a staircase leading downstairs rooms meant for storing ammunition and artillery. There are passages cut into the hill which might have used as escape routes.

Excavations have revealed innumerable archaeological remains in the island, including bricks used for the construction of houses, stone walls, broken ceramic potsherds, coins Roman potteries and artifacts, which indicates that the island was a major port and had trading with Roman Empire during 4th to 6th centuries.

Designated as a UNESCO World Heritage site since 1987 the caves have been maintained by Archaeological Survey of India.

Elephanta Island is now a hot tourist spot of Mumbai visited by about 25000 visitors every month. Visitors are allowed from 9 am to 5 pm. Monday is closed. September to March is the best time to visit the island when the weather is pleasant. Every February a spectacular dance festival is held on the island, hosted by the Maharashtra Tourism Development Corporation, which attracts a number of visitors. Special events are held at the caves during the World Heritage Day on April 18 and World Heritage Week during November 19-25.

If you have a keen interest in archaeology and rock cut architecture you can spend a whole day exploring the attractions of the island. It is a worthy destination that will take you back into history and will cherish you with some everlasting memories!

Next Story
Chaitra Navratri – Time for Worshipping the Goddess Durga